“Go Your Own Way” was recently the theme of a Bayside Family Law Solutions Facebook post. It featured an illustration of a young boy on the cusp of making his way in the world, and spoke of new beginnings and self-determination.

The theme of this post resonated with me after reflecting on a get-together I enjoyed with my former high school classmates over the Christmas holidays. I hadn’t had any contact with most of them for more than 30 years, and it was amazing to hear of the life paths they had walked to date.

I went to a pretty good government school and our cohort were a good crop. The year above me included a future State Premier, and the year below me featured amongst their number a future Danish Princess! No such stars were in my year of graduates, but my classmates did include several future lawyers, doctors, a vet, an engineer, some research scientists, an AFL player and many other talented people. I was also of aware of some suicides, others living in wheelchairs after car accidents, a few scandals and some personal tragedies.

I’ll admit to being just a bit anxious about sitting down and having a drink with a bunch of people I grew up with so long ago, potentially dredging up some feelings that weren’t all positive from that time. Fortunately, our school days were a substantial number of years behind us – allowing the group to meet as adults, leaving any schoolyard hostilities and angst to history.

A number of things struck me about some of the stories that were shared at the reunion.

The first was how fortunate I’ve been – not in a ‘good on me’ way – but more in the sense of bad things happening to good people. I became aware of the extent and difficulty of the issues that people had faced in the previous 30 years, and of the number of my former classmates who had suffered from mental illness or from terrible accidents. Some people’s lives had otherwise fallen off the rails and been ruined. “But for the grace of God” comes to mind.

The second thing that struck me was how resilient people can be. One girl in my class (we’ll call her Karen) told me of losing her husband to a heart attack when he was in his 30s. He was a self-employed tradie and she was a police officer. They had three young children, the youngest being only three weeks of age. Of course, Karen was completely devastated, but she managed to find a way forward, getting help to run her husband’s business for several years before eventually deciding to sell it. She raised three beautiful children as a single mum, returned to study and became a barrister. Amazing!

The third thing that impressed itself upon me was how wonderful it is to see people being comfortable in their own skin and doing what they want to do. Our little group at the get-together included a ‘hippy chick’ living very happily in south-west WA. Another member of the group previously worked as an economist with the Commonwealth Government, but today works as a teacher in Vietnam. This former economist was (and is) extremely smart, but was a real dork in his highschool days. He got picked on a lot, and tended to walk with his shoulders slumped and his head down. Now he accepts his differences, he’s comfortable in his own skin and the choices he has made. He looks me in the eye when we talk. 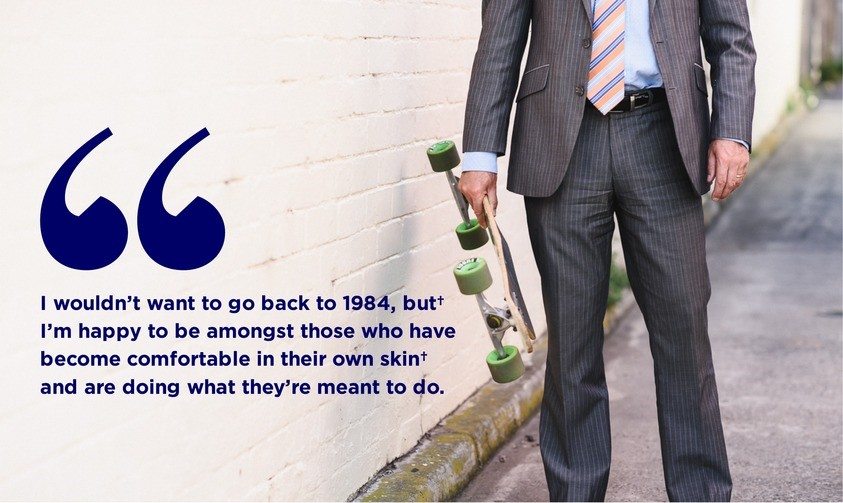 1984 was the year I finished high school. It was a long time ago. John McEnroe won Wimbledon. The
AFL was the VFL. Bob Hawke was PM. There was a boycott of the LA Olympics by the USSR. 1984 was the year of Karate Kid and Footloose. It was the era of acid washed jeans, mullet haircuts, the Oils and AC/DC, but also Madonna, Tears for Fears and Wham. A personal favourite was The Message by Grand Master Flash and the Furious Five (featured decades later in the movie Happy Feet).

Personally, I wouldn’t want to go back to 1984 – but I’m happy to be amongst my peers who have grown comfortable in their own skin, living life on their own terms. So I say to that young boy heading out into the world: have a good look around, learn your strengths, find your own path, and give life a good shake. You can’t predict what it will throw at you, but you can take the hand you’re dealt and make the best of it.